Joaquim Pinto is the director of celebrated films like What Now? Remind Me and Fish Tail. In the 1970s and 80s, however, he was also a sought-after sound engineer and collaborated with many of the great directors of the period. Here, he shares his memories of working with Raul Ruiz.

I completed film school (in sound engineering) in the late 1970s. My fellow classmate, Vasco Pimentel, would become my boom operator, but also my creative partner. Together we discussed and shared our ideas on sound recording, editing and mixing. We were full of theories and perhaps unreasonable radical ideas, but had little practical experience. We were overwhelmed by the films of Raul Ruiz, such as The Hypothesis of the Stolen Painting.

In 1981, we were of course excited when we were invited to work with him. Our first film together was The Territory. It took us a couple of days to understand Raulʼs method. Ruiz worked with a loose script and loved to invent and improvise and change direction right on the set. Nothing could be taken for granted. We had to anticipate and read his moods and be ready to capture the action. Ruiz never wasted time. He did not listen to our sounds; he never wanted IFB (headphones). His comments came later in the day, during the daily rushes, where he would share his ideas and directions. We quickly adapted our setup. No sound carts, no sitting around and waiting for the action. While Vasco operated the main boom, I would carry a recorder and mixer on my shoulder, while operating a second boom with one hand and mixing with the other.

As we continued to work with him on other films, we were given more space to experiment and invent: from placing tiny microphones in actor’s feet to “amplify” soft sounds (as if using a sound magnifying glass) to exchanging actorʼs voices in “real time” dubbing during shots (like in City of Pirates), from video recording the camera assist with our sound mix, so that we could review and discuss work in isolated locations without dailies (like in Manoel’s Destinies/Manoel on the Island of Marvels) to recording with two synchronized stereo Nagras (there were no multitrack location recorders at the time) so that we had different perspectives and mixes for the same shot (like in Treasure Island). 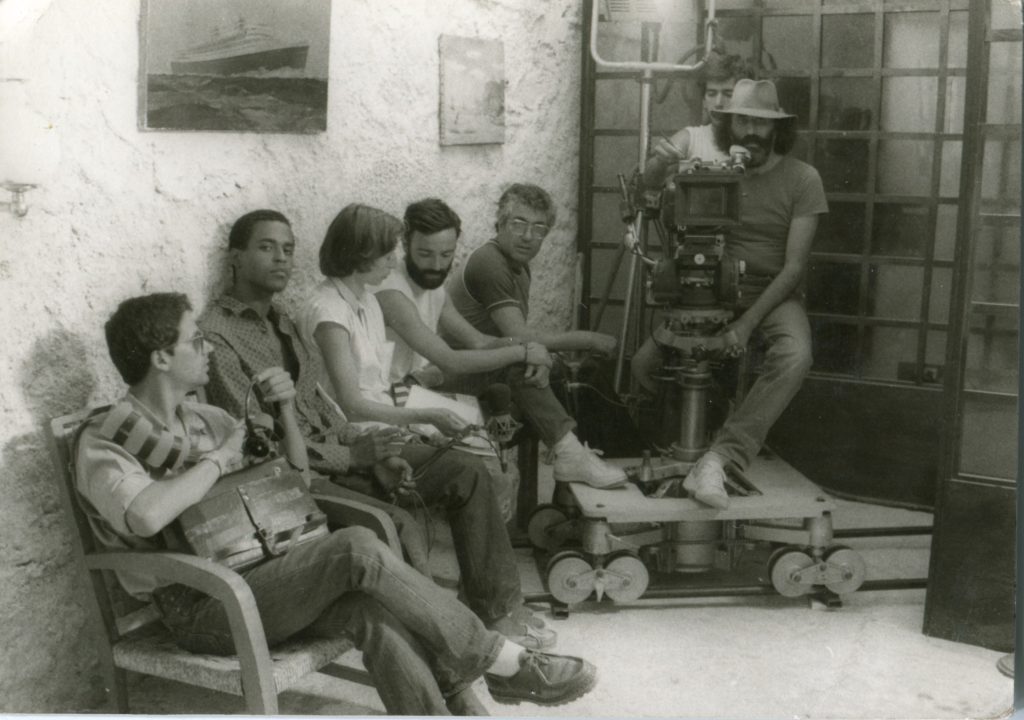 We all became good friends and sometimes played tricks on one another. One day, while shooting Vanishing Point, we invented a story. We told Ruiz that in fact he wasn’t the fastest director on the planet; Fassbinder had shot 100 elaborate and different scenes in a single day and no one has been able to match it. The next day, we started early and went late into the evening; after the 101st scene, we all celebrated with a toast.

I believe that cinema is a collective art. Working with Ruiz and Oliveira, I felt like one of those many anonymous craftsmen in the Middle Ages that, led by someone inspired by grace, contributed to the birth of abbeys and cathedrals. We, humans, can be extremely violent and destructive, mainly led by fear and manipulation. I thank them both for having given a sense of purpose to my life, for letting me be part of the spiral of creation.

Photo (banner): Joaquim Pinto and Raul Ruiz during a lunch break on the set of The Territory.

Photo (inset): On the set of Treasure Island, Joaquim Pinto, at left, holding a Nagra (a portable professional audio recorder), next to Gita Cerveira, the boom operator. On the right, cinematographer Acacio de Almeida with the camera.